Parametric breather surfaces are known in one-to-one correspondence with the solutions of a certain non-linear wave-equation, i.e., the so-called Sine-Gordon Equation. It turns out, solutions to this equation correspond to unique pseudospherical surfaces, namely soliton. Breather surface corresponds to a time-periodic 2-soliton solution.

controls how far the tip goes, and 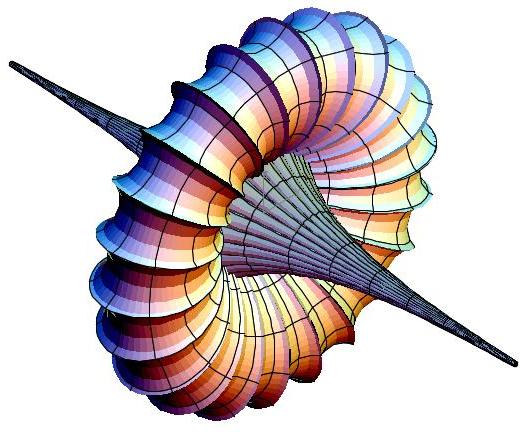 is a surface with Gaussian curvature

such that the first and second fundamental forms are:

in these coordinates become a single equation, the sine-Gordon equation (SGE) :

The SGE is one of the model soliton equations.

3D-XplorMath is a Mathematical Visualization program. The older original version, written in Pascal, runs only on Macintosh computers, but there is also a newer cross-platform Java version, called 3D-XplorMath-J which is written in the Java programming language; to use it, you must have Java 5.0 or higher installed on your computer.

Founder of Hyang Language Foundation and also a Math Nerd. View all posts by hilmanpalisabana

This blog is licensed under a Creative Commons Attribution-ShareAlike 3.0 Unported License.